While most people around Athens know the name Avalanche for its outstanding pizza, Avalanche is also known for its spunky softball team that is often out standing in the outfield on defense while the other teams get hit after hit.

Avalanche Pizza is the lucky sponsor of the plucky co-ed rec softball team that I play on in Athens this year, and the team is one of the most fun squads I have ever been a part of. We are extremely thankful to Avalanche for the sponsorship and guarantee that the prices of their always-tasty pizzas are much lower than my ERA (Earned Run Average). 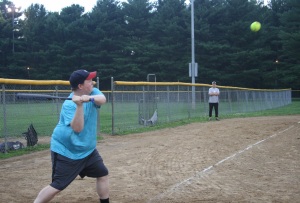 My teams have always focused on the “rec” part of softball, as they have been great fun but not always super successful. Here are a few examples from over the years, and I promise these are all true:

This year, our team has been playing pretty well and we are getting ready for a big playoff run. We have done a good job of setting the other teams up into thinking they can beat us, but all this time we have just been preparing for the playoffs.

Sure, I dropped two easy ground balls while I was playing pitcher the other night, but now teams will hopefully underestimate our defense. It’s all part of my plan.

And sure we have players striking out in slow pitch softball, but we are again just setting the other teams up. I should point out that I have also have swung and missed a few times in slow pitch softball, and let me tell you, it can be an awful feeling. The ball is just sitting there and I have no idea how I miss. It’s kind of like if you go to put the keys into your car ignition to start it, but instead you miss and accidentally throw your keys out the window, and then fall out of the car.

But this year, our team has been great about not throwing the ball around to let runners advance, our batters have nailed some solid hits and we have played some really good softball. Team Avalanche has made some great plays on defense, we play hard and we’ve done pretty well.

Also, we haven’t had too many of our patented fall-from-ahead losses and we even have a few wins.

Best of all, we have some funny players who are always smiling, high-fiving each other and making me laugh. My stepdaughter was kind of enough to point out that we have a wide age range on the team (meaning that I am the old guy playing on a team with plenty of younger players), but the team gets along well and we have a lot of fun. I wouldn’t want to be on any other team.

The Athens league is filled with teams of nice people who are there to have fun, and I have made a lot of friends there over the years on my teams and on other teams. The city does a nice job running the league, and it’s a fun community activity. Some teams are really, really good, while other teams are more on the level of my teams. The good thing is, we all know that no matter our differences, we can all come together to complain to the umpires.

I have been lucky enough to play with some great friends over the years, and it’s been fun making friends on the team again this year.

Our players know that Avalanche Pizza expects only the best out of its pizzas, and that they only expect the best out of their softball players, too. I can’t promise Avalanche that we will win World’s Best Pizza Sponsored Softball Team, but I can promise that we will play hard in the upcoming playoffs and we’ll eat plenty of pizza. And even if we lose, we’ll go down swinging (and hopefully not missing)!

3 thoughts on “Field of Daydreams – Tales of Athens Rec Softball”