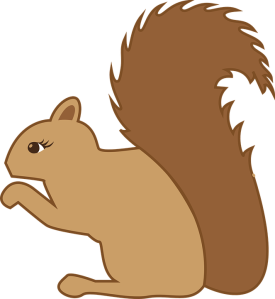 I know a squirrel who has a pretty good story to tell his or her friends.

One night this summer, I looked out onto the back steps and noticed that the cat was staring at something near the pear tree.

I had been working out in the yard for much of the day, so I was hoping that the cat was just admiring my hard work.

“Great job, Nick!” I imagined that cat was saying to herself. “It’s amazing how hard you work on these super hot days in order to keep the yard looking so nice. Also, have you lost weight? You are in inspiration!”

Oh wait, that was what I was thinking when I was looking in the mirror a few minutes ago. Here is what the cat was probably thinking.

“I am SOOO hungry! Is that food over there? When is that vane guy going to stop looking in the mirror and feed me? I haven’t eaten in 7 minutes! I also would like to be petted soon, but not too much!”

Anyway, when I looked out in the yard, I saw the cat watching a squirrel that appeared to be injured. It was trying to dig something, but then it walked away a little and fell over.

“Poor little guy or girl, I have no way to know what sex it is,” I thought to myself. “You know, the name squirrel should denote a female of that type of animal, and a male should be named a squoy.”

Anyway, the cat got down off the steps to investigate, so I picked up the cat and made her go inside and then I watch the injured animal for a few minutes and wondered if I should do something.

Did it have rabies? Was it just old? Should I take it to a vet? If so, should I say that I’m concerned because it was not acting squirrely?

After a few minutes, I went back inside and told my wife and one of the kids that we should keep the cat inside so that it wouldn’t hurt the already injured squirrel or squoy.

They went to check the animal out for themselves, and then came up with a shocking discovery.

“What?” I replied. “Do squirrels get drunk?”

My wife then pointed out that the squirrel was under the pear tree that I had cleaned around earlier in the day. It was a hot summer day, and I picked up a lot of the pears that had fallen onto the ground, but some of the older ones remained in the grass. As near as we could tell, those pears had apparently fermented in the hot sun and the squirrel had enjoyed several of them.

As I watched the animal, I noticed that it kept holding onto a pear, sometimes in its mouth, sometimes with its paws, while it continued to stumble around.

“I’ve been there,” I said softly to the squirrel. “Moderation is the key, my friend, moderation.”

For several minutes we watched the squirrel jump around the yard, try to climb the tree and not even notice when my stepson walked right up to it. The squirel finally did notice when he was about two feet away, and then it jumped up and meandered in another direction.

After that, the squirrel went into another yard and then hopefully found a comfortable tree to sleep off the wild night of eating fermented pears.

And I went back inside to cleaning up the kitchen, feeding the cat and thinking about how you never know what you are going to see from one day to the next.

You might think you are having a quiet, day normal, and then suddenly you have a squirrel party in your backyard.

I imagine the squirrel had a pretty good story to tell the next day, and I am pretty sure it was a little slower and more careful than usual while jumping around trees and walking on power lines.

It’s been several weeks now since it happened and the pears are all off of the ground now, but sometimes late at night, if I listen closely, I can hear a squirrel jump through the trees in the backyard, make some happy little chirping noises and then, if the night is right, let out a little hiccup.