For many years, cauliflower was content to stay behind the scenes as a “Wind Beneath Your Wings” type of food item that was there to lift up the other parts of the meal.

No one really ever wanted to eat just cauliflower, but it was fine to add to a salad, stew, curry, pasta, pizza or really just about any dish. Recently, though, cauliflower has been receiving acclaim as a “Super Food,” and people seem to be using it more and more often.

But what do we really know about cauliflower anyway? Our crack team of investigators went behind the stem to find out, and what they discovered may surprise you. 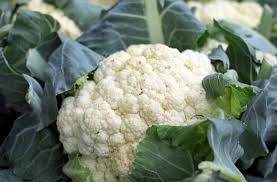 First of all, I’m no longer sure how to pronounce the name of this precocious plant. I used to think it was “call-ih-flower,” but lately I have been hearing people refer to it as “collie-flower.”

I was not sure which was correct, so I looked it up online and heard both pronunciations. Still confused, I turned to the Merriam-Webster website which for some strange reason has a page filled with 15 phrases that they claim rhyme with cauliflower. I’m not sure why they made such a list, but you can find it here.

In order to test their alleged rhymes, I am going to use several of them in a terrible poem and see how it works out. I am also adding a few of my own rhymes because I discovered that I enjoy thinking up rhymes to cauliflower.

Our researchers also dug up that the cauliflower is related to cabbage, broccoli and brussels sprouts, and is the sworn enemy of the rutabaga.

The rutabaga is a root vegetable, which is opposite of the cauliflower, and is a cross between the cabbage and the turnip. I cannot find any definitive proof that they are enemies, but I am pretty sure they don’t like each other.

One disconcerting fact we found about cauliflower is that there does not seem to be any candy cauliflower for sale this fall.

Another problem is that the flower heads on cauliflowers are sometimes refereed to as “curds.”  I don’t feel comfortable eating curds, as I hear they attract spiders to sit down beside you.

One interesting point about cauliflower is that the  brown spots on them apparently aren’t mold or bad spots, but are just signs of a soil deficiency from when the plant was growing, and they are fine to eat.

And if you are eating a cauliflower, you should know that you are eating a Super Food. It is considered as such because it has compounds that can prevent or fight cancer, improve heart health, fight off infections and even help with your brain function. I don’t understand how this could be, but I haven’t eaten cauliflower in a while, so maybe that’s why.

Finally, i was surprised to learn that a bite-sized piece of cauliflower is referred to as a caulifloweret.

Even more surprising is the fact that Merriam Webster also has a page devoted to phrases that rhyme with caulifloweret.

So what have we learned today?

Well, this Super Food that will make me smarter is actually a bunch of flowers with edible brown spots, the antonym of cauliflower should be rutabaga, and I definitely will spend a lot of time thinking up rhymes for this vivacious vegetable during my next hobby hour.

Do you have any cauliflower rhymes or thoughts about fantastic food? Feel free to comment below. Thanks!