To me, the whole idea is kind of odd, and the cold cereal flavors just keep getting more and more bizarre.

First of all, most people don’t want to admit it, but breakfast cereal is gross.  The cereal pieces become too soggy and mushy, the milk gets all weird and the whole thing is just terrible. If I am in the same room as someone who is eating cold cereal in milk, I have to find a reason to excuse myself so that I can leave.

Do other people have this problem? Or is that just me?

Are there other foods that you can’t stand to watch people eat? Spaghetti can be troublesome for me, but I am mainly just embarrassed about how I eat it and I don’t think about others.

In addition to cereal with milk being gross, I also find it hard to understand many of the newer cereals that I have seen in the store recently.

Here are a few absurd but true examples of cereals I have seen at two grocery stores in the last week.

Twinkies Cereal – I love Twinkies and I don’t see how they can be improved by being made mushy.

Why would you ruin Twinkies by turning them into this cereal? 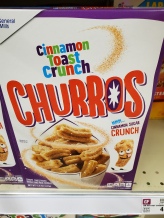 Cinnamon Toast Crunch Churros – Ok, this is just taking the idea of ruining cinnamon toast by turning it into a breakfast cereal, and going one step further for no logical reason. Where will this madness end!

Churros are delicious, but I see no point in putting them into a cereal bowl. I would, however, enjoy eating this cereal dry. I very much like the idea of having a bag of mini churros that I could take with me wherever I go. 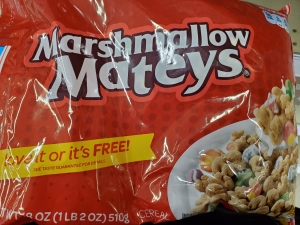 Poptarts Cereal – Poptarts are warm and dry. Why would I want them to be cold and wet in milk? It’s somewhat similar to the idea of turning cinnamon toast into a breakfast cereal. Do they think they can turn any breakfast items into a cold cereal? Why not Egg McMuffin Cereal? Or Pancake Mateys?

Also, this is me being nitpicky, but why aren’t they capitalizing the word “Poptarts” on this box? Is it cool and hip to not use capital letters? And does the whole family eat “poptarts” cereal so they need this “FAMILY SIZE” box? I had never even heard of it before, and they are already marketing these to large families. 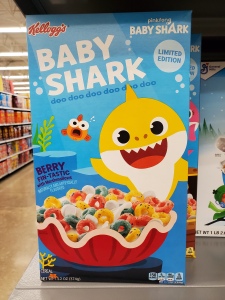 Baby Shark Cereal – Finally, there is actually a Baby Shark cereal now, and I find the box very disturbing. Just look at it! That box will give me nightmares! I assume this is related to the song, but how does this work for a cereal? Does the cereal seem cute at first but then annoying after you’ve had it a few times? Does it taste like sharks?

Cereal companies have always made breakfast foods based on pop culture items like cartoon characters or movies, but they always seem pointless to me.  I guess they get my attention, so I suppose it’s working, but it doesn’t make me want to buy the cereal.

I understand that I am not the target audience for most breakfast cereals these days, but I do wonder if the next logical step will to be to try to make breakfast cereals based on food items that adults enjoy. They could make items such as:

Just thinking about it now, I am considering making some sort of Cinnamon Toaster/Baby Shark/Marshallow Mix, and then inviting some of my mates over for a party. Maybe Twinkies Cereal will be a good thing after all.

I just hope they don’t make a Spaghetti and Meatballs Cereal. I don’t think I could handle that.